Guernsey Stamps is delighted to announce the release today (8th May 2012) of a collection of six stamps to mark the 30th birthday of His Royal Highness Prince William, Duke of Cambridge, the elder son of The Prince of Wales and the late Diana, Princess of Wales.

The set of stamps highlights some of The Duke's achievements as well as his support for organisations that reflect his interests and issues about which he cares, both in the UK and overseas.

In late 2000 The Duke visited Southern Chile where, during ten weeks as a volunteer with the youth and education charity Raleigh International (36p stamp), he helped to construct walkways from log posts and taught English in local schools.

The Duke graduated from St Andrews University in June 2005 receiving a 2:1 in Geography (47p) and, after leaving university, he undertook a programme of work experience while preparing for the Regular Commissions Board for entry into The Royal Military Academy Sandhurst.

The following year, Prince William became the Patron of Mountain Rescue (England and Wales), reflecting his interest in youth sport along with his desire to highlight the vital work of mountain rescue organisations (52p).

Completing the set is an image of The Duke who, in January 2010, qualified as an RAF Rescue Pilot having successfully completed a twelve month advanced helicopter flying training course at the Defence Helicopter Flying School based at RAF Shawbury (65p). Although still a Lieutenant in the Household Cavalry, The Duke is now a fully operational Search and Rescue Pilot with the Royal Air Force, based at Anglesey, Wales.

Dawn Gallienne, head of philatelic at Guernsey Post, said: - "Our brief to the designers was to select images that would depict some of the ways in which The Duke of Cambridge uses his role to contribute to good causes - and how involved he becomes in some of his chosen charities." 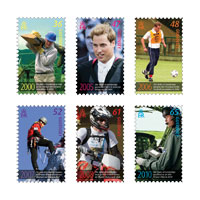